An Amulet is an object, which protects its owner against some negative influences or it gives him/her power to accomplish certain task or go through certain (difficult) life situation. Amulet can be created from any material, which comes from nature and has ability to keep the energy inside (for example crystal, gold, silver, copper, wood, clay...).
Best time for creation of an amulet is from one dark moon to next dark moon, what means the cycle of 28 days. The amulet is mostly prepared for certain person and it is loaded with protective energies and certain qualities, which should influence that person in positive way (in fact, these qualities will move into the aura of the holder).
The positive qualities are going inside the amulet by saying positive affirmations with strong concentration and by creating of some positive elemental being, who keeps the energy and do special tasks, which were given to it. 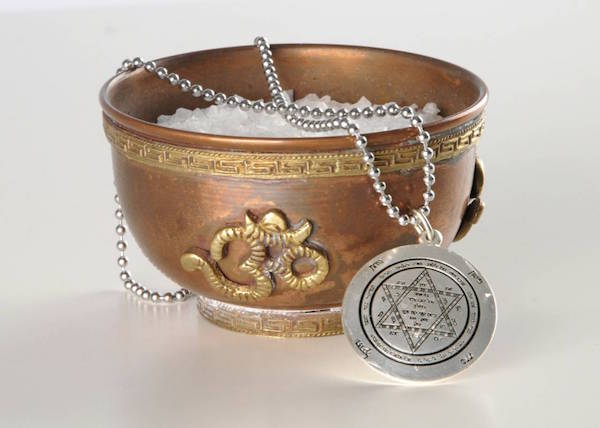 We can offer you protective amulets of two kinds:

1. For people, who feel lack of energy or preparing themselves for some difficult action we offer protective amulets loaded with power and protection. The price for such amulet is 100 Euro. An amulet will be loaded with powers for 7 days.

2. For people who are under the influence of black magic or some big negativity, we offer extra strong amulet, which is loaded individually according to special needs of the client. The price of this amulet is 350 euro. An amulet will be loaded with powers for 28 days.

Ritual for creating of the protective amulet

Do this ritual in the day of dark moon. Then, you will return to the amulet every day till the next dark moon. This will make the energy of the amulet growing stronger and stronger.
Preparations before the ritual: place the amulet on the altar (or other place, where you want to perform your ritual) directly in the middle among four violet candles. Pay attention to your feelings and state of mind. The ritual will be successful only if you feel good and relaxed!
Ritual instructions

Ask for a basic free analysis and start right now to improve your life, relationships and self-knowledge!

Do you have a relaitonship problem and you don't know what to do? Are you confronted with something, what can be called supernatural? Something like a curse or demons? Do you want to glimpse into the possible future, or do you need answers for your questions? We work magically on the problem until the job is done. We keep contact with our clients until the problem is solved.

You can visit us personally for consultation or meditation.

Find balance, peace and new impulse in our magic office. Find the answers to your questions with us. Our individual counselling will help you to take the right decision.